This is a question we get asked a lot. Tipping customs can vary widely from country to country. In fact, in some parts of the world, it is considered offensive to leave a tip no matter how great the service is. The other question we get a lot is when and where to tip—How much do you tip your guides? When do you tip the maids? Do you tip the driver? These are all good question and the answers is—it’s complicated.

Below is a graphic that shows the general rules based on regions around the world but there are exceptions especially in very touristy areas where locals have grown accustomed to more international tipping practices. In these places, locals might expect a certain amount based on your country of origin. 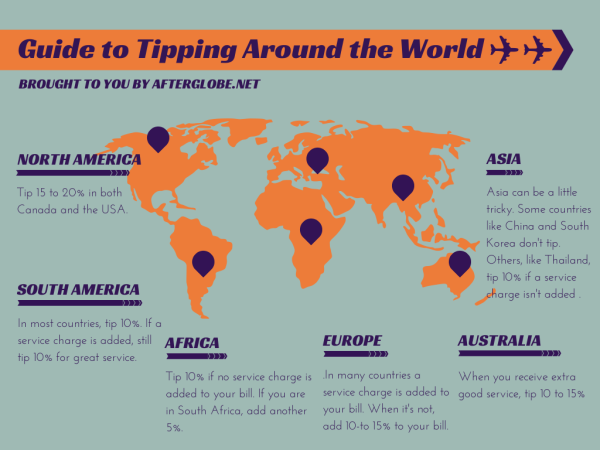 In many counties around the world, a service fee is already included in the bill. If it is, there is no need to add anything to the bill. Many countries around the world have a different pay scale for the service industry and different systems of benefits—such as healthcare and workers compensation—that allow them to be less dependant on tips as their North American counterparts. As a result, the quality of service does vary from country to country. We suggest you set your expectations accordingly and get to know the locals and their culture.

Remember tipping is really up to you. It’s your choice when and how much you want to tip. It is perfectly okay to over or under tip based on the level and quality of service you receive. We suggest you always show your appreciation for great service but that doesn’t always have to take the form of money. Kind words, genuine gratitude, and a great review can often work just as well. The important thing is that you recognize quality service and show that you appreciate the work involved in providing it.

Learn more about the ins and outs of tipping in this great article on cntraveler.com—click (here) if you want to see it. The article breaks it all down by country and type of service. Below is what they had to say about Argentina.

At Restaurants: 10 percent to the waiter.

At Hotels: At least 25 pesos for a porter, and up to 45 for a particularly helpful one.

Dollars Accepted? U.S. dollars are always accepted as tips, though you can’t get USD in Argentina, so bring cash with you.

P.S. “Tipping is more expensive now than it used to be,” says travel specialist (and native Argentine) Vanessa Heitner. “There were times when a 20-peso tip at the higher end meant a lot, but nowadays it isn’t enough.” Because of inflation, she notes, the proper amount is a moving target. Also, be sure to have plenty of change in your pocket for tipping—there’s a serious shortage of it, and many shops and restaurants will refuse to break bills.

Thank you for your interest in traveling with Endless Turns!  One of our travel specialists will contact you shortly.